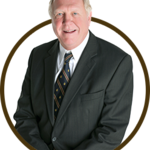 Bill Brudvik has officially retired.  He had been practicing law for more than 46 years. He has appreciated being able to not only help people with their legal problems in times of need, but to advise them in the conduct of their business and personal lives to avoid legal pitfalls. Bill believes that, more often than not, the solution to legal disputes lies within the parties themselves, and the attorney's job is to simply help them find it. Brudvik Law Office values his wisdom and knowledge each day.

Bill is Past President of both the North Dakota Municipal Attorneys Association and North Dakota Council of School Attorneys. A veteran of United States Army Military Intelligence, Bill is a member of the American Legion and a lifetime member of Veterans of Foreign Wars.

Thank you for contacting us. We will get back to you shortly.

Please complete all required fields below.